Dear Cancer, Thank you for...


Thank you for taking all the hair off my head, making me feel freakish and self-conscious.  In the wee hours of the morning when my bladder wakes me for one of it's urgent calls, I pass by a large mirror on the way to the bathroom.  Imagine my fright when in the moonlit reflection I see only an old Uncle Fester in a pink nightie following me to the loo. Scares me every night! 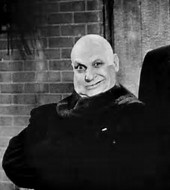 Thank you too for taking my eyebrows and nearly all of my eyelashes so that the "sick with cancer" look is complete.

Finally, thank you for taking the hair on my arms, under my arms and from my lady bits to my knees.

What I don't understand is why you insist on leaving the hair that grows from my knees to my ankles - you know, the hair most visible when I wear a pair of shorts, capris, a skirt or a dress (you know, summer clothes) forcing me to shave all summer.

Was it just too much to go the distance and relieve me of this one pesky task while I go through chemotherapy?

Getting pulled over by the police!

Chemotherapy Wednesdays are not my favorite days.  Taking the treatment is relatively easy once the IV is in place.  The hard part is staying awake and alert - during and afterwards - as some of the drugs they administer have a sleep-inducing effect.   My mind gets foggy and I am unable to accomplish much of anything for the remainder of the day.

This Wednesday's treatment went a little longer than usual as I have had an infection in my port and there was some pretreatment diagnosis and determination about whether to us it this week (they did) and also as I shared that I had new pain, I had to go to radiology for testing after my six hours of chemo, adding another hour and a half to my already long day.  (I know, boohoo, poor me.)

So, when my husband who drives me to and from chemo, sits patiently with me each and every time I have chemo, or a doctor appointment or a blood test, etc., said he was hungry, we decided to stop for an early dinner before heading home.

Pulling into the restaurant, we noticed a policeman had stopped a motorist on the side road and as we passed I glanced over to see what was happening.  It looked like a typical traffic stop.  As we drove slowly by, we both noticed that the policeman was staring at me.  A lot of people stare at me these days (scarf induced), but when a police officer does it, it's a bit unnerving.  Do I look like a criminal on a wanted poster? Did they get a BOLO (be on the look out) for a female pirate that just robbed a boat on one of the local lakes? Was there something about our car that caused him to stare?

We pulled into the restaurant to park and when getting out of the car, found he was parked right behind us. I was a bit surprised but not concerned as we had done nothing unusual.  I got out of the car, smiled at him, and walked over to find out what he wanted.  We exchanged hellos and he got out of his car and came up to me and gave me a hug.  He said he noticed the scarf and assumed I was going through cancer treatments and wanted to share his sympathies. He said I was brave and should keep up the fight as life gets better. He shared that he had colon cancer some seven years ago, underwent treatment and was doing well.   He wanted to give me encouragement that I too can make it and simply to wish me success with my treatments.

I gave him another hug then, congratulating him on his success and thanking him for taking the time to share his experience with me. He went on his way, and we on ours.

Were I not just out of a chemo treatment, full of drugs and battling the urge to fall fast asleep I might have had my wits about me and I could have gotten his name. I should have invited him to join us for lunch, I should have done something more to invite him to share his story and to learn more about what he was going through.  But I didn't and I am sorry for that.

(It is not likely that anyone who knows this kind-hearted soul reads this blog, but if you happen to know this tall, Livingston County (or MI State Police) Officer, please let him know he made my day and gave me hope and encouragement.)

This year alone, in the United States, nearly 1.7 million people will be diagnosed with new cancer, more than 600,000 will die from it. There are many of us who have it, have had it, or will have it and nearly all of us know someone who has been through it. And yet, having cancer can make one feel isolated, as if no one else really understands what we are going through.

If those of us who have or have had cancer were to be less reserved and more empathetic, willing to put ourselves out there for as long at it takes to share an encouraging word and a hug, as this officer did with me, we could make the cancer journey a little easier to take. I know that I will be less reserved in the months to come and will look for opportunities to encourage others more frequently, for no other reason than that it might momentarily, even temporarily, alleviate the feeling that you are alone. You are not, and nor am I.

Thank you, Officer, for the reminder.

There is a party game wherein one is asked a question beginning with “Would you rather….?”   The person asking the question will pose two op...

Alma Lyffe
Recently diagnosed with Stage 3 Ovarian Cancer and Stage 2 Uterine Cancer, I found myself unable to have totally honest conversations with friends and family about the more frightful feelings associated with cancer. Wanting only a "cure" and to know that all is or will be well again, even those closest to me are unable to truly "hear" my concerns and listen/respond openly and honestly. So, to keep their faith alive and alleviate concern/stress for those I love deeply, I find myself unable to put forward anything but a positive face and a sense of confidence that all will be well. This is not however how I truly feel and I wanted/needed a place to share what it is like to face cancer. This is that place and I thank you for letting me share these thoughts with you.